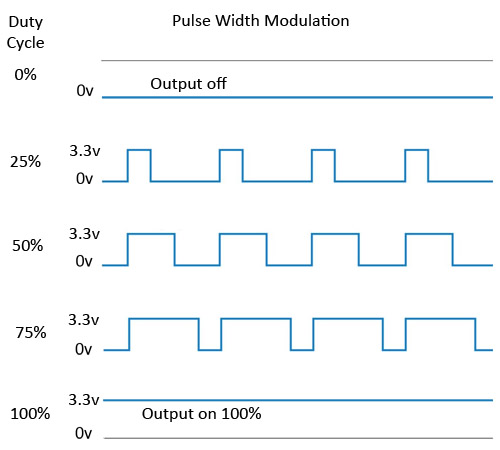 This post will demonstrate how to use Pulse Width Modulation (PWM) on the Raspberry Pi with Python programming. PWM is often used to control motors including servo motors used in robots and automation, lights and other electronic devices.

Digital output is either on or off. It cannot vary between on and off as analog output can. If an LED or motor is connected to a normal digital output, it will only operate at full on (output on) or full off (output off).

With the use of PWM, we can simulate varying levels of output energy to an electrical device. At any given time, the digital output will still be on or off. But, we can pulse the output with varying widths to control the amount of effective output. Shorter on cycles compared to the off cycle will deliver lower overall output. Longer on times relative to the off time deliver higher overall output. This relationship between the on and off duration is called “duty cycle” and is measured in percent of on time compared to the off time. Thus a 25% duty cycle will have an on time 25% of the total cycle with 75% off. A 50% duty cycle will have equal on and off times. With PWM we can vary the duty cycle from 0% to 100%. 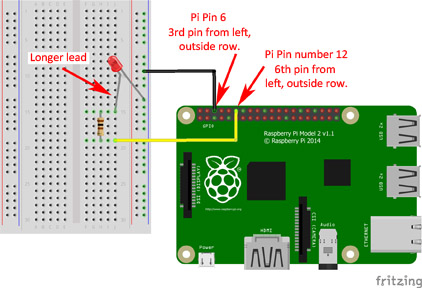 We can now use Python to configure Pi’s pin number 12 for PWM and then vary the duty cycle. To demonstrate the varying duty cycle we will vary pin 12 from 0% to 100%. This will cycle the LED from full off to increasing levels of brightness until full on. Then we will reverse the cycle from full on and dim the LED until full off, and repeat.

Following is the Python source code used for this demo. You can install the program in either of two ways.

A. Key the source code below into Raspberry Pi’s Text Editor. Save it into the Pi folder as pwm-led.py

B. If the Pi is connected to the internet, you can download it from our website as follows.

The LED should cycle between off to on to off and repeat the cycle until you press Ctrl c.