The default behavior for most Raspberry Pi operating systems is to have the IP address assigned dynamically when connecting to a network. This is known as DHCP (Dynamic Host Configuration Protocol ) and is handled by the router. Left in DHCP mode, the address may change from one boot to the next.

It is also possible to assign a fixed IP address to the Pi. There are many reasons for doing this, especially if you connect to the Raspberry Pi in a headless mode where you need to know the IP in advance in order to connect.

1.  Connect the Pi to the network – either via Ethernet or WiFi.

2.  Determine the IP address you will set as static. This must be an IP that is not already in use by another device on the network. This can be done in a couple of ways.

a) The easiest way is to use the dynamic IP assigned to the Pi and make it static. Boot the Pi and find it’s dynamically assigned IP by entering “ifconfig” in the command line interface (or LXTerminal if running the Raspbian GUI desktop). Use the IP address next to “inet addr:” for either eth0 (Ethernet connection) or wlan0 (WiFi connection). Or you can do both if you have both an Ethernet and WiFi connection!

b) Alternatively, you can install a network scanner, like Advanced IP Scanner or Network Mapper, on your computer or the Pi to map the network IP addresses in use. Use any IP within the subnet that is not already in use. 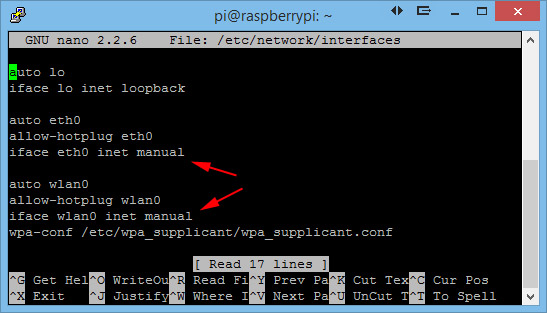 4.  Reboot the Pi. Confirm the change by typing “ifconfig” to check your handy work. You should now be able to consistently connect your Pi to your network with its fixed, static IP address.