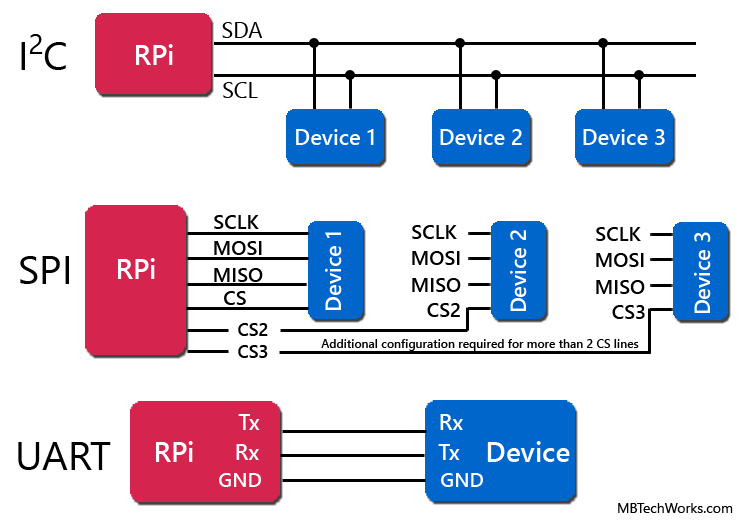 So exactly what do these cryptic acronyms mean?

All represent standard communications protocols that are available through the Raspberry Pi GPIO (General Purpose Input/Output) pins. Each has characteristics that may be better for a particular project. This article will contrast the three methods and highlight some of their advantages/disadvantages.

Data communications is important for devices, like the Raspberry Pi, to communicate and exchange "data" with other devices. Examples of devices that the RPi may communicate include: display devices, sensors, robotics, other computers, input devices, industrial controls, scientific instruments, . . .

I2C, SPI and UART are all digital, serial communications methods.

*Note: The CSI and DSI connectors on the Pi also offer data communications to camera and display devices, but this article covers the general purpose communications buses on the RPi GPIO.

Before we discuss the features and differences between these methods, let's review a few common communications terms and definitions.

I2C is bidirectional, synchronous, serial communications interface. If operates on two lines in a half-duplex mode. It was originally created by Philips Semiconductor which later became NXP Semiconductors. A single master (the RPi) can communicate with one or more slave devices. Each connected device is selected via a 7 bit address (10 or more bit addressing is possible, but more complex). Originally limited to 100 kbits per second, it now supports faster transmission rates. The Pi can support 100 kbits standard mode as well as 400 kbits "fast mode", with some reports citing higher speeds depending on cable length, board model and software processing.

With its 7 bit addressing, I2C can support up to 127 devices (or nodes). The two lines are called SCL and SDA. SCL is the clock line for synchronizing transmission. SDA is the data line through which bits of data are sent or received. During transmission, the first byte includes the 7 bit address plus a read / write bit. Subsequent bits represent the actual data.

I2C connection to the RPi is made using GPIO board pins 3 for SDA and 5 for SCL (BCM mode GPIO 2 and GPIO 3). The RPi GPIO operates at 3.3v so care must be taken to ensure connections to slave devices are also 3.3v. A voltage level converter can be used if necessary to interface to other devices, i.e. 5v Arduino to RPi 3.3v.

SPI is a bidirectional, synchronous, serial communications interface - like I2C. Also like I2C, it is used for relatively short distances. Unlike I2C, however, SPI operates at full duplex, meaning data can be sent and received simultaneously. Additionally, it can operate at faster data transmission rates, with rates upwards of 8 Mbits or more possible on the RPi.

SPI can communicate with multiple devices through two ways. The first is by selecting each device with a Chip Select line. A separate Chip Select line is required for each device. This is the most common way RPi's currently use SPI. The second is through daisy chaining where each device is connected to the other through its data out to the data in line of the next. The image at the top of this article illustrates the first method.

There is no defined limit to the number of SPI devices that can be connected. However, practical limits exist due to constrains by the number of hardware select lines available on the master in the first method, or the complexity of passing data through devices in the second daisy chain method.

The RPi has two Chip Select (CE0 & CE1) lines readily available. More can be defined by configuring other GPIO pins and through software programming.

Origins of the UART go back decades making this the granddaddy of communications hardware / protocols. Its simplicity and wide application has stood the test of time and is still a popular method for data communications.

UART is a hardware implementation that supports bidirectional, asynchronous, serial communications. It requires two data lines - one for transmit and one for receive. The transmit line of one device is connected to the receive line of the second device, and vice versa for transmission in both directions.

NOTE: RPi has two UARTs. A fully functional UART and a second one called a "mini" UART with less capability. Prior to RPi 3, the full UART was available on GPIO pins 8 and 10. However, to support Bluetooth on the RPi 3, the full UART was moved from the GPIO to the Bluetooth chip and the mini UART was made available on GPIO pins 8 and 10.

It is possible to redirect the full UART to the GPIO, but requires configuration changes. For more detail about this topic, see Raspberry Pi's UART documentation.

UART data transmission speed is referred to as BAUD Rate and is set to 115,200 by default (BAUD rate is based on symbol transmission rate, but is similar to bit rate). Rates approaching 1 Mbps have been successful with the RPi.

As with any interface to the RPi GPIO, voltage must be considered. RPi pins operate at 3.3v while other devices may operate at 5v or even higher. Voltage level converters are required to interface the RPi to such devices.

Fortunately, the Raspberry Pi supports all three and implementation is relatively easy (Pi 3 UART notwithstanding). Some advantages / disadvantages to consider: